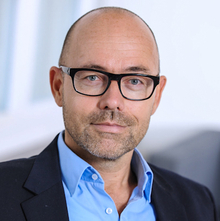 In 2002 Daniel Müller accepted a full professorship of Cellular Machines at the Biotechnology Center of the University of Technology, Dresden. He acted as a director of the Center from 2003-2005. In 2006 Müller co-founded one of the largest Bionanotechnology Spin-Offs in Germany. The company developing and manufacturing the world’s first robot that fully automatically conducts single-molecule experiments, was sold in 2008. In 2008, Daniel Müller, in a team with Carsten Werner and Ulrich Nienhaus, launched a new BMBF research center for Molecular Bioengineering (B CUBE, www.bcube-dresden.de) at the TU Dresden. In December 2010, Müller accepted the Chair of Bionanotechnology at the ETH Department of Biosystems Science and Engineering (D-BSSE) in Basel.

Read what the University of Basel said about him in an online-portrait entitled "Tracking Molecular Interactions".

Engineering, Production and Assembly of Multifunctional Fusion Proteins into Nanocells